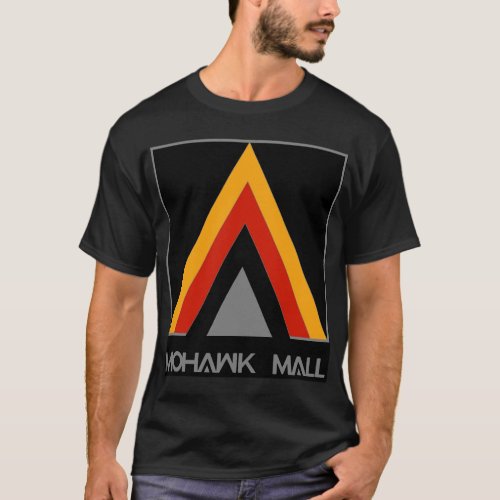 This shirt features a logo I made that is inspired by the old logo of the Mohawk Mall that was demolished in 2000. Mohawk Mall opened October 5 of 1970 in Schenectady NY with Montgomery Ward, Boston Store, J.M. Fields, and also featured Pantry Pride. The mall had a 2-screen Cinema with 350 seats per screen, which expanded over time The theater was purchased by USA Cinemas in 1987, then by Loews in 1988. Eventually Pantry Pride closed and Price Chopper leased the space. In the early 1990's Media Play went in where the Boston Store was. Media Play sold books, music, movies, electronics, toys, snacks, some clothing, and video games. This diverse centralized product mix competed with many stores in the mall. Eventually Price Chopper closed, which was divided into smaller spaces, that Fay's Drugs and the Paper Cutter moved into. Fay's, which later became Eckerd, pulled out of the mall because of competition from the CVS in same the mall. They moved Eckerd to a nearby plaza. After this Paper Cutter closed, and Present Co. closed. Other tenants followed, as they vacated what became a dead spot in the mall. This pattern continued in different parts of the mall which was vacating. Montgomery Ward closed in 1996. By 1999, only the Cinema, Media Play, Marshall's, Gallery 44 and Rex remained. After the Cinema, Rex and Gallery 44 closed, the mall was demolished around Media Play and Marshall's while they remained opened. The site is now a successful strip-mall called Mohawk Commons, with several big-box stores, such as Target, Lowes.